Iliotibial band syndrome (ITBFS) is one of the most common running injury causing lateral (outside) knee pain in runners.

The iliotibial band is a thickened band of fascia (a 3D gel network that infiltrates between the skin and muscle tissue) which traverses the outer thigh. The structure also reaches to the lumbar spine (lower back) and to the front or anterolateral aspect of the knee.

In this way the ITB connects the gluteus maximus to the lumbar fascial tissue, the outer quads muscle (vastus lateralis) and the outer hamstring muscle (biceps femoris).

The ITB thus has a complex interactive relationship between all these different structures and the bones in your legs (femur and tibia/fibula). 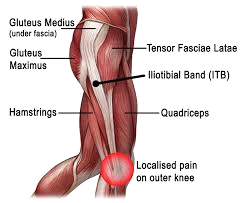 Typically patient’s complain of pain present with tenderness over the lateral femoral epicondyle (outside of knee) and a sharp, burning pain when local pressure is applied to lateral epicondyle during knee flexion and extension and often at it’s worse with the knee at a 30° of flexion (slightly bent). Symptoms often start after around two miles of running with downhill usually being worse. Diagnosis of ITBFS is based on clinical examination by a Physiotherapist.

There are two main theories behind ITBFS: the compression model and the friction model. As the ITB inserts in the region of the femoral epicondyle, it glides over the lateral femoral epicondyle when the knee bends. Here it is thought that due to biomechanical imbalances, the ITB can either firstly become compressed or secondly there is increased friction (rubbing) which causes pain and inflammation. Scientific literature often suggests there is there an overlap between these two models.

Research suggest that biomechanical factors such as increased hip adduction (movement towards your mid-line) and weakness in the hip abductor and/or external rotators (Gluteus medius) can be involved, as well altered neuromuscular control, or poor running technique leading to pelvic drop or rotation.

ITBFS is often preceded by numerous biomechanical issues and the lateral knee pain itself is often the end symptom that you become aware of.

The key biomechanical goal is to reduce strain related to excessive lengthening of the ITB and the associated stress at the insertion at the lateral femoral epicondyle. In the initial stages (up to 2-weeks), anti-inflammatory medication and ice is recommended, along with a reduction in your running volume and intensity, and to try and avoid downhill running if possible (not very easy where we are in Bath!).

ITB stretches can be important, but you will also need to stretch various muscle groups around the hip and pelvis, such as the quadriceps, gluteals and hamstrings to reduce the likelihood of recurrence.

Core strengthening exercises (particularly gluteus medius exercises) and progressive resistance exercises will be given to functional strength and motor control. Movement control tests such as the single leg squat, the step down test, and single leg dead lift can help to provide baseline measures from which to improve.

Sometimes exercise alone does help improve biomechanics and the need for a motion control device / insert or orthotic is helpful. Just like a shoe with arch support and a degree of motion control but it’s more specific and thus more likely to address more subtle requirements.

If localised pain persists at the lateral femoral epicondyle, an ultrasound-guided corticosteroid injection could be considered. You can discuss this further with your physiotherapist.

If exercises are now pain-free and you can achieve them with good form, this is a good indication that running can be recommenced. A guideline for this is 6-weeks on average but this can vary and is based on successful completion of the earlier phases of recovery. Graded progression is achieved by running every other day with concentration on good running form, and initially may include easy sprints on level ground. Downhill running is not recommended in the first 2-weeks, and an emphasis on movement control is recommended to focus on pelvic control, forward trunk, and softer landing.

It’s hard to know for sure without analysing a running style whether or not specific drills can assist in recovery and also reduce the advent of the problem reoccurring.

Please feel free to make contact to discuss any aspects of this information or to book an appointment with one of our therapists in Bath or Bristol.